Listings for all motion picture-related collections include Touchstone Pictures' and Hollywood Pictures' films in addition to Walt Disney Studio's films. Why? See the home page of this guide for the relation between these two firms and Disney.

The BPCL has many kinds of materials from the motion picture industry: scripts, DVDs, press kits, etc.

The BPCL has a few Disney movies on DVD. Consult this link for a list.

Press kits typically include film synopses, cast and credits, production notes, biographical information of the main cast and crew, as well as photographs from the picture. Some of the classic Disney press kits include:

There are many motion picture scripts cataloged and searchable via the BGSU Libraries Catalog. Search by title or browse by the local call number to see if we have the desired script. Additionally, we have many that are not yet cataloged. To see if the desired script is in this group, please ask us for assistance at our Reference/Service Desk, by phone at 419-372-2450, or via email.

The BPCL has a number of posters for Disney and Touchstone Pictures (* denotes these) films, including, but not limited to:

.. a select number of Disney periodicals. Please click on the title to see which volumes and issues we have of each.

The BPCL has a considerable number of comics relating to Disney. All comics are cataloged in the BGSU Libraries Catalog. You can search them by title or keyword. Below is a small, selective list of the BPCL's Disney comic holdings. 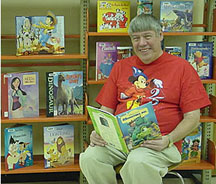 The Curriculum Resource Center has a number of Disney children's books.  See The Hungling Disney Collection for more information.

The BPCL has an extensive collection of postcards classified by country, U.S. state, and subject. Disney-related postcards may be found under the headings:

To view these postcards, simply stop by our Service/Reference Desk and ask for assistance.

Vertical file materials in this part of the collection containing a variety of materials on Disney include magazine and newspaper articles and pamphlets. Contents are accessed under the heading "Disney" are as follows:

This file contains pamphlets about the Walt Disney Archives and the Walt Disney Studio Movie Club and a few newspaper and magazine articles concerning the Walt Disney Company and its activities such as new movies and retail stores. Within the file there is an article discussing a disturbance in Disneyland in 1970 by "Yippies" or members of the Youth International Party. For more information about this event see Disneyland: Inside Story

Basics of Using the BPCL

The BPCL is an archive/repository, so our policies for use of our materials are a little different than you may be used to.  Take a look at the Basics of Using the BPCL to get an idea of how to use our collection.

The following web sites have a great deal of film information, including Disney/Touchstone/Hollywood films.

What is realia?  Well, realia include artifacts that are three-dimensional and non-print, such as toys or games or clothing.  The BPCL has a number of Disney realia, including but not limited to the following:

The BPCL Mail Order Catalog Collection includes several catalogs (some are listed below) advertising Disney-related materials. These catalogs can be useful for studying the diversity of products developed from Disney characters and productions. Ask at the BPCL Service/Reference Desk for assistance in finding materials in this collection.  Follow the links below to find out which issues we have of each catalog.