Some important participants in the Chautauqua and Lyceum movements include:

Much of the Lyceum & Chautauqua Collection is available off-site, so if you would like to use these resources, please allow a few days to move the materials to the BPCL. 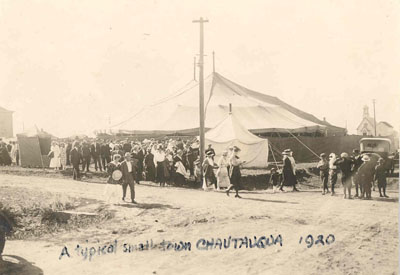 Josiah Holbrook established the first Lyceum in Millbury, Massachusetts, in 1826, because he wished to "organize his farmer neighbors into an association for mutual intellectual improvement." In his book The American Lyceum of Science and the Arts, Holbrook stated that the purpose of his Lyceum was to "raise the moral and intellectual taste of our countrymen." From the outset, the Lyceum strove to use eduction to reach people at the grassroots level, having them share information -- in the form of instructive lectures -- amongst themselves and thus achieve improvement hrough communal edification. Holbrook believed that education, necessarily of common interest, was a religious endeavor, and that improving one's mind also bolstered one's soul. Educational in purpose, that Lyceum differed from established universities of the time in that it was spawned in diffuse, rural America, and by nature created an intimate learning group that was far from a private, monolithic institution. Its success relied upon the willingness of its participants to share their personal expertise on subjects as diverse as agriculture and geometry, physics and literature.

A singular, isolated gathering, Holbrook's Lyceum rapidly became a group in need of fresh informational sources, and solicited speakers from nearby cities and towns to deliver lectures about new subjects. This model Lyceum inspired many emulations, and by 1850 a total of 3,000 Lyceums had been established throughout the country based on Holbrook's original plan and purpose to promote personal improvement through mutual education. The groups in this loosely-defined educational system thus offered the divergent population of the United States a wide variety of applicable educational opportunities. Many of these locally-based, independent Lyceums survived the Civil War, lasting through the 1870's.

Consult the the Chautauqua Institution's web site for a brief history of the Institution.

As the Lyceums became more popular in the 1840s, opportunists recognized the growing potential found in formally organizing Lyceums by systematically scheduling and distributing lecturers to awaiting groups of people. "Circuit" or "tent" Chautauquas combined the most efficient and successful elements of both Holbrook's Lyceum and Vincent's Chautauqua. Organized Lyceum systems presented "platforms" of talent to towns along their circuit, and provided their own tents, stages, and chair, in addition to the scheduled entertainment. Now the Chautauquan ideal of bringing educational programs to everyone was a viable possibility for even the most rural of American dwellers.

Keith Vawter (of the Redpath Chautauqua Bureau) and J. Roy Ellison (of the Ellison-White Chautauqua Bureau) were the originators and perfecters of the circuit Chautauqua system. Coordinating the schedules and towns on the circuit, they devised a cyclical operation that enabled different parts of the same circuit to perform in many towns simultaneously. A lecturer scheduled to perform on the third day of a program then packed and travelled to the next town on the circuit in time for his or her third-day performance once again. Equipped with the requisite seven tents (most circuits stayed in a town an entire week, but others lasted only five days), the bureaus would keep them in constant rotation, perpetually performing in the seven towns at once.

At first, these "little Chautauquas" tried to imitate the original "Mother Chautauqua" by providing uplifting education and entertainment to community members who were interested in self-improvement through learning. Initially political in nature, the programs presented refreshingly passionate and controverial speakers. The Progressive movement gained momentum directly through the circuit Chautauqua, as programs stressed betterment through embracing democratic values and ideals. Aiming for a greater audience, the Chautauqua bureaus eventually tended toward more generally palatable, less challenging programs in an attempt to increase profits by drawing more people and offending less. The content of the lectures and performances offered by the bureaus became less substantive and therefore less risky, as is evident by the changing plaforms advertised in the trade periodicals found in the BPCL collection.

The decline in the quality of programs proved only one reason for the decline and eventual disappearance of the circuit Chautauqua. By the early 1900s, the new popularity of radio, along with the accessiblity of film, drew more attentive audiences, especially in urban areas. At the turn of the century, other entertainments and leisure activities, such as boxing, were becoming more popualr as well. Lower income urban dwellers tended toward more diversionary activities than what was offered by the middle- and upper-middle-class' "uplifting" lectures and performances. By the late 1920s, it was also much more difficult for remote towns to amass the advance guarantees required for incoming programs. Having survived World War I, even the circuit Chautauquas could not endure the hardships of the Depression, meeting their ultimate demise by the early 1930s.

Organized Lyceums still exist in some cities, providing lectures for academic audiences. The Chautauqua Institution remains thriving on its original site in Western New York, and continues to fulfill its original purpose of educating, enlightening, and entertaining myriad audiences. Many independent Chautauquas gained popularity for a time in the late 1800s, and a few still remain, including one in Lakeside, Ohio, and another in Bayview, Michigan.