Information about a study of whether daily library fines are effective in changing patron behavior. Poster presented at Access Services Conference 2017 by Katie Mihaly and Andrea Boehme.

This poster contains preliminary data from a study on library fines.  The data describes the difference in behavior between a control group of patrons charged daily overdue fines and an experimental group who are not.  Also included are the results from a survey of OhioLINK (Ohio’s academic library consortium) libraries on their current library fine practices and opinions. The research is partially funded through an award from OhioLINK.

Our final paper is available in BGSU's Institutional Repository:

Fine Efficacy: An Experimental Study of the Effect of Daily Fines on Borrower Return Habits 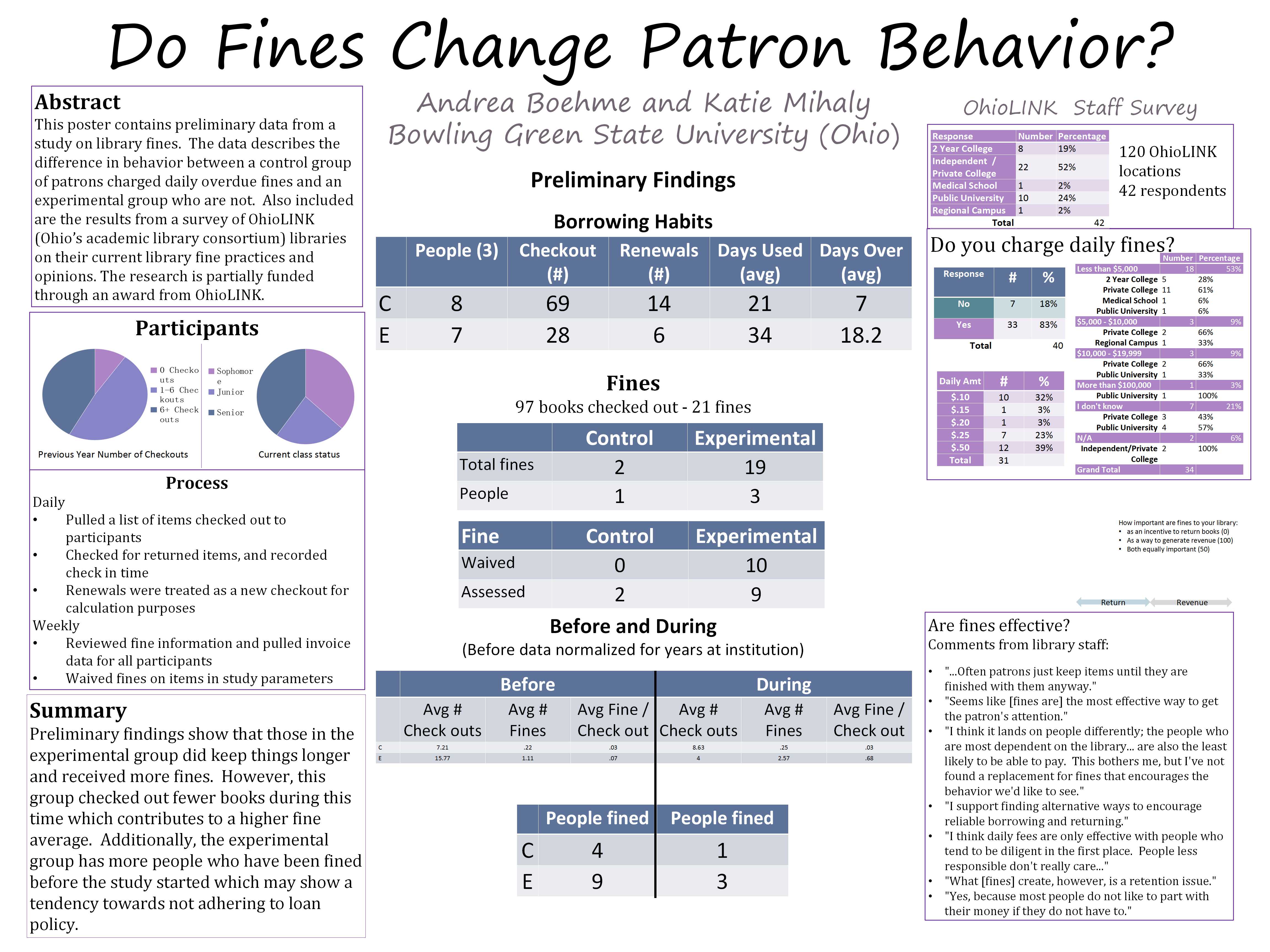 Libraries that have eliminated fines

The College of William & Mary; Brigham Young University; New York University; Eastern Kentucky University; Vancouver Island University; and Texas A&M University have all eliminated daily fines as part of a reassessment of circulation policies (Boyce 2014, Wilson 2014, Rupp, Sweetman and Perry 2010, G. Mitchell 2000, Reed, Blackburn and Sifton 2014, Mosley 2004). Because each of these libraries made other changes concurrently with eliminating fines it is not possible to say with certainty which of the changes, both positive and negative, that resulted could be attributed to eliminating fines. All libraries reported that their changes were, overall, positive, but there were also drawbacks observed.

NYU experienced a 33% decline in fine revenue generated, despite increasing reserve fines and billing fees to compensate for the loss of daily fine payments. They also saw a small increase in number of books that became overdue, even though loan periods had been extended. However, "the number of books that went into a billed-as-lost status dropped 65%" in the first year of using the revised policies (Rupp et al. 2010, p. 168), indicating that while more books were slightly overdue, many fewer books were kept until they were severely overdue. Simultaneously with eliminating fines, NYU also increased the number and frequency of overdue notices, which may explain this beneficial change.

William and Mary was able to reallocate a substantial portion of the position formerly dedicated to billing after eliminating fines (Boyce 2014). Because they simultaneously extended undergraduate loan periods, many fewer books were billed as lost, which required a manual process. Part of their decision had been due to the fact that the amount of revenue generated by fines had been less than the cost in staffing to collect those fines. Gregory Mitchell (2000) stated that this was also true at EKU, but neither author went into detail about how the cost of collecting fines was calculated. Texas A&M also found that they were spending four times as much to collect fines as they were collecting (Mosely 2004). Their calculations took into account all of the staff time involved with collecting fines: filing, cash handling, processing appeals, explaining fines to patrons, and time spent by university staff at financial offices outside of the library. Mosely (2004) points out that a library eliminating fines and saving staff time will still have a decline in revenue unless staff is laid off. She also warns that whatever processes replace the fine system "must not be so cumbersome that they consume all of the recovered staff resources" (p. 15)

Vancouver Island University chose to eliminate fines partially because with decreasing print circulation, fine revenue was no longer sufficient to justify the cost in staff time and patron goodwill (Reed et al. 2014). It was also an effort to encourage more use of the print collection, which sadly was not among the observable results. In the year after fines were eliminated, a smaller percentage of checked out books became overdue. They also chose to forgive any fines that had previously been accrued, which anecdotally led to many happy patrons returning to use the library after avoiding it (Reed et al. 2014).

When Texas A&M eliminated fines for main collection items, they designed a system that would prompt users to return books without imposing a financial penalty except for "the most irresponsible of users" (Mosely 2004, p. 17). A lost book processing fee of two dollars is added after 45 days overdue, but is forgiven if the books are renewed, and this can be an unseen renewal (users do not need to bring the books to the library). Until books are returned or renewed, library privileges are also blocked. If books are not returned within 60 days, the replacement cost is also charged to the account. At this point, books must be brought in person to be renewed, a conscious decision to add an inconvenience as a punishment to replace the financial punishment of fines. In this new system, all fees are forgiven if the books are returned within 90 days of when they became overdue. The results of the change were positive; the addition of the small lost book fee got patrons' attention and they were motivated to return or renew, while forgiving the fee in the majority of cases meant that there was still an improvement in patron satisfaction and staff time was saved.

While all six of the libraries discussed above have eliminated daily fines for their main circulating collections, at least five (NYU, VIU, BYU, William and Mary, and Texas A&M) retain fines for reserve items and/or recalled items (Rupp et al. 2010, Reed et al. 2014, Wilson 2014, Boyce 2014, Mosely 2004). The sixth, EKU, did not mention any remaining fines after the policy revision (G. Mitchell 2000).

Unsurprisingly, patrons do not like to be charged fines. Edewor (2010) found that university staff especially resented paying their employer, while Davies and Sen (2014) found that students were unhappy with fines charged by their British public university as tuition rates increased. Students reported negative emotions when they are fined, but also reported that if they truly needed the book, a fine, while unpleasant, would not convince them to return it (Davies and Sen 2014). Mosely (2004) notes that in situations when a library fee appears as a line item on students' tuition bills, they may feel that being charged additional late fines is unjust and expect more lenience regarding late books.

While patrons dislike paying fines, they also frequently support the policy of charging fines (Edewor 2010, Adomi 2003, Davies and Sen 2014, Bhatt 2011). When surveyed, more patrons than not agree that fines are necessary to ensure others use the library responsibly.

Incentives to return books on time

When Brigham Young University eliminated fines, they also looked at loan periods and concluded that increasing undergraduate loan periods would reduce the number of renewals needed, thus reducing the number of forgotten renewals and thus fines. Another concern was ensuring that other patrons have access to checked out titles. They began sending notices to any patron who has a book another patron requests, without placing a recall with a new due date. Informing the patron that someone else wants the book sometimes leads them to return it, and if they don't, an interlibrary loan request can then be placed (Wilson, Frazier, and Harter 2015).

The same paper also compared graduate student return rates before daily fines were imposed and afterwards, and found that the fine did not make a statistically significant difference. Both before and after the daily fine was added, a billing fee was charged for severely overdue books, and the authors speculate that that was sufficient incentive on its own. Finally, they also compared faculty behavior at the two universities, one which had no penalties for faculty for any book which was eventually returned, one which charged both daily fines and, eventually, a billing fee. Faculty at the no-penalty school were more delinquent, but it was not possible to say whether this was due to the daily fines or the billing fee (Sung and Tolppanen 2013). Wilson (2014) and Rupp, Sweetman, and Perry (2010) also argue that a billing fee for severely overdue books is a sufficient replacement for a daily fine.

Another strong incentive available to academic libraries is the ability to prevent students from registering for the next semester's classes, graduating, or receiving transcripts until books have been either returned or paid for. This will not prevent patrons from keeping books somewhat longer than their due dates, but it does provide some protection for the collection. G. Mitchell writes that the Eastern Kentucky University Libraries decided to change blocking patrons from a last resort to the first line of defense, and eliminated fines for books until they are considered "seriously overdue" (p. 19) and billed, at which point library privileges are also blocked. Reed, Blackburn, and Sifton (2014) and Mosely (2004) also indicate that blocking patrons is part of their fine-free policies.

One library attempted to encourage on-time book return by offering a reward, rather than a punishment (W. B. Mitchell and Smith 2005). However, after several years of offering a chance to win a gift card to any student who checked out books and returned them all on time, there was no observable effect on book return rates.

Yau Ching (2005) writes that user education can encourage better behavior from patrons as well as ensure that users will feel less upset with the library when consequences such as fines do arise. Two areas identified as causing friction with patrons are recalls and late renewals (renewing a book that is already late sometimes generates a fine, but patrons may not realize this). Suggestions include posting library policies at the circulation desk, and including circulation instruction with other library instruction.

Sifton (2009) argues for the abolition of fines in public libraries; however, if this is not possible, he suggests ways to reduce the burden of fines, such as offering "food for fines" canned good drives or reduced or waived fines to specific groups, such as senior citizens.

Reed, Kathleen, Jean Blackburn, and Daniel Sifton. 2014. “Putting a Sacred Cow Out to Pasture: Assessing the Removal of Fines and Reduction of Barriers at a Small Academic Library.” Journal of Academic Librarianship 40(3/4): 275–80. 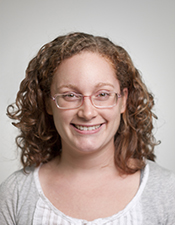