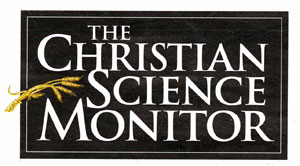 Use the criteria to the right to verify the credibility of the Christian Science Monitor and to look for possible biases.

In an editorial or opinion piece it is expected that the author(s) will include their opinion or perspective on an issue.  News articles are usually authored with the aim of objectivity.

How to Evaluate Information

Who is the author of the information?
This refers to both individual authors and sources. Are they credible?  What qualifications do they offer?

Is the publication date appropriate for your needs?
Is the information outdated?  Or, is it too recent to be considered credible?

Is the information relevant?
Does it meet your needs?

For what type of audience was the information created?
Is it for a general audience or a more particular subset of the population?

How to Detect Bias in News Media

Media have tremendous power in setting cultural guidelines and in shaping political discourse. It is essential that news media, along with other institutions, are challenged to be fair and accurate. The first step in challenging biased news coverage is documenting bias. Here are some questions to ask yourself about newspaper, TV and radio news.

Who are the sources?

Be aware of the political perspective of the sources used in a story. Media over-rely on "official" (government, corporate and establishment think tank) sources. For instance, FAIR found that in 40 months of Nightline programming, the most frequent guests were Henry Kissinger, Alexander Haig, Elliott Abrams and Jerry Falwell. Progressive and public interest voices were grossly underrepresented.

Is there a lack of diversity?

From whose point of view is the news reported?

Political coverage often focuses on how issues affect politicians or corporate executives rather than those directly affected by the issue. For example, many stories on parental notification of abortion emphasized the "tough choice" confronting male politicians while quoting no women under 18--those with the most at stake in the debate. Economics coverage usually looks at how events impact stockholders rather than workers or consumers.

Are there double standards?

Do media hold some people to one standard while using a different standard for other groups? Youth of color who commit crimes are referred to as "superpredators," whereas adult criminals who commit white-collar crimes are often portrayed as having been tragically been led astray. Think tanks partly funded by unions are often identified as "labor-backed" while think tanks heavily funded by business interests are usually not identified as "corporate-backed."

Does coverage of the drug crisis focus almost exclusively on African Americans, despite the fact that the vast majority of drug users are white? Does coverage of women on welfare focus overwhelmingly on African-American women, despite the fact that the majority of welfare recipients are not black? Are lesbians portrayed as "man-hating" and gay men portrayed as "sexual predators" (even though a child is 100 times more likely to be molested by a family member than by an unrelated gay adult—Denver Post, 9/28/92)?

What are the unchallenged assumptions?

Often the most important message of a story is not explicitly stated. For instance, in coverage of women on welfare, the age at which a woman had her first child will often be reported—the implication being that the woman's sexual "promiscuity," rather than institutional economic factors, are responsible for her plight.

Is the language loaded?

When media adopt loaded terminology, they help shape public opinion. For instance, media often use the right-wing buzzword "racial preference" to refer to affirmative action programs. Polls show that this decision makes a huge difference in how the issue is perceived: A 1992 Louis Harris poll, for example, found that 70 percent said they favored "affirmative action" while only 46 percent favored "racial preference programs."

Is there a lack of context?

Coverage of so-called "reverse discrimination" usually fails to focus on any of the institutional factors which gives power to prejudice—such as larger issues of economic inequality and institutional racism. Coverage of hate speech against gays and lesbians often fails to mention increases in gay-bashing and how the two might be related.

Do the headlines and stories match?

Usually headlines are not written by the reporter. Since many people just skim headlines, misleading headlines have a significant impact. A classic case: In a New York Times article on the June 1988 U.S.-Soviet summit in Moscow, Margaret Thatcher was quoted as saying of Reagan, "Poor dear, there's nothing between his ears." The Times headline: "Thatcher Salute to the Reagan Years."

Are stories on important issues featured prominently?
Look at where stories appear. Newspaper articles on the most widely read pages (the front pages and the editorial pages) and lead stories on television and radio will have the greatest influence on public opinion.

These criteria were developed by Fairness and Accuracy In Reporting:http://www.fair.org/index.php?page=121